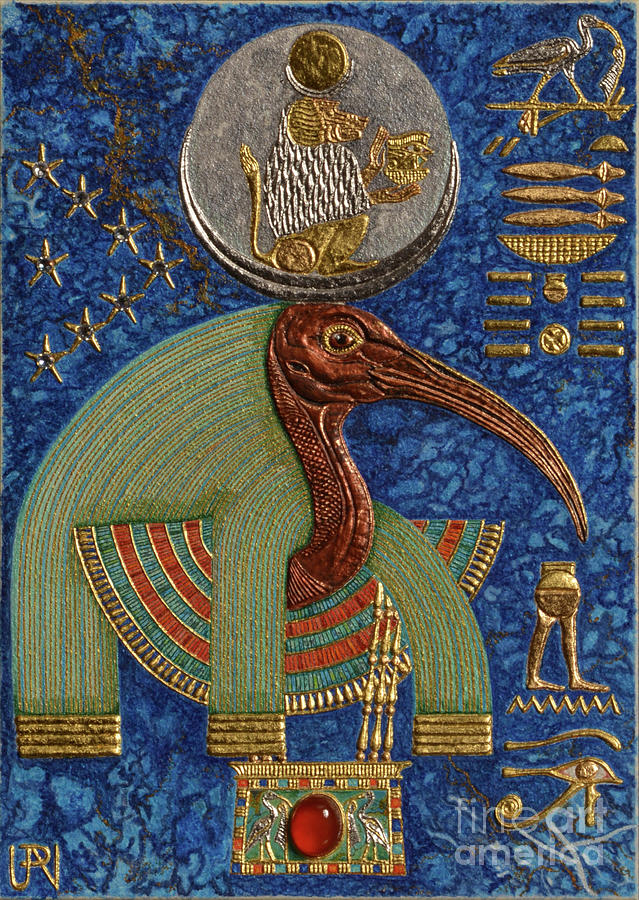 The Lords of Valor Triptych is the first “family” of Gods comprising the Aegis Series of icons I have been compelled to create. These aegis-shields form part of an arsenal of spiritual technology whose aim is to engage specific Netjeru in the work of defending, healing, and empowering the human condition, and in particular the human family committed to the service of the Netjeru in the current age. This work acts like a magnet to the spiritual bodies of the Gods, attracting Them to focus Their powers into objects that magnify and expand the presences of the Divine in the material world. As the focal point of the Daily Cult, offerings, and pilgrimage to sacred sites recognized throughout the natural world, the aegis-shields are *generators* fueling and enabling the work of the Kemetic community to push the constructive process of sacred creation forward. Such a process is a co-creative and interdependent endeavor taken up by Gods and humankind together, and the Aegis Series of icons are holy tools aiding the divine-human struggle in the accomplishment of cosmic justice or Ma’at.

My work began with the Aegis of Djehuty and the Souls of Khmennu, a cult image embodying the apogee of the strange and tempestuous relationship between the Gods Heru (Gr. Horus) and Set, Whose icons flank that of Djehuty (Gr. Thoth) in the triptych. In one of the more bizarre moments of the famous dynastic conflict between Heru and Set, the God Set is tricked into eating lettuce glazed with the semen of Heru, which is later- during one of the assemblies of the Gods to place judgment on the matter of this raging family quarrel- called forth from the forehead of Set as a manifestation of the lunar disk worn by the God Djehuty. It may thus be said, in a manner of speaking, that the God Djehuty is the son of the God Heru via the body of Set.

But there is much more going on in these myth cycles than trickery or sexual dominance; the Gods Heru and Set are establishing the foundations of sacred kingship on earth and within the hierarchy of the Gods, and, by extension, over the fragile cosmic order through which creation is expanded and maintained. The emergence of the lunar disk from the forehead of Set (which appears from the force of Heru’s semen digested by Set) heralds the healing of the Wedjat Eye of the God Heru after its blinding or wounding by the anger of Set. It is the God Djehuty as Master of the lunar disk Who restores the fullness and potency of the Wedjat Eye as the incarnation of the Full Moon; thus the epithets of Djehuty appearing on the right side of the Aegis of Djehuty which declare Him as the One Who “brings the Wedjat Eye”.

The restoration of the Wedjat Eye by way of the wisdom of Djehuty is one of the principle themes expressed by the Aegis of Djehuty. Crowning the head of the Deity is the lunar disk, seen in both Full and Waxing aspects, in the center of which resides the God Djehuty in His form of the “dog-headed” baboon (Papio Cynocephalus). Here the God performs the act of offering back the completely healed or “Wedjat ” Eye after its period of injury or bleariness. In this instance the Wedjat Eye embodies not only the sight and potency of the God Heru as Lord of Justice, but also, and on an even greater cosmic scale, the wholeness (wedja, uwdja) of creation as a perfect manifestation of the Divine; a creation in alignment with the cosmic justice of Ma’at. It is Djehuty, the representative of the cosmic order, Who establishes (or reestablishes) the sound (uwdja) working of creation after periods of chaotic instability; it is He Who brings together the disparate forces of creation, weaving them together as the fabric of cosmic stability. Within the iconography spelled out by The Lords of Valor Triptych is the culmination of that cosmic disturbance caused by the conflict of the two Gods Heru and Set; that these “Two Combatants” are reconciled one with the other according to the fullness of Djehuty’s wisdom, and that They become the sovereigns over the two halves of creation.

When all three panels of The Lords of Valor Triptych are viewed together, one will notice that the Wedjat Eye at the bottom right of Djehuty’s epithets faces the Aegis of Sutekh Great of Strength. The intention here is at once cultic and magical; for it is the God Djehuty, Bringer of the Wedjat Eye, Who takes the injured Eye in His hands and restores It to Its fullness. This is the Eye Whose sight is diminished by the God Set (or Sutekh) during His great conflict with Heru, Who severs the testicles of Set in recompense. But the Wedjat Eye is the healed Eye of Heru, embodying the reconciliation of aspects and the wholeness of creation, and this wholeness embraces the wounds inflicted by the Two Combatants upon one another, and grants healing to them as part of the cosmic justice that is Ma’at ; the Eye of Heru is restored to Heru while the testicles of Sutekh are restored to Sutekh. The magic of the restored Eye of Heru (offered up by the God Djehuty) is enough to pacify the anger of Sutekh and channel His tempestuous actions into the struggle for cosmic harmony.

On Full Moon night (tep semdet) May 10, 2017 the Aegis of Djehuty and the Souls of Khmennu was taken on pilgrimage to the Bonneville Salt Flats in the northwestern Utah desert to receive the first in a series of sanctification rites. One of these is called the Khnem-Iah or “Union With the Moon”, during which the cult image is placed in the open air where it will receive full exposure to lunar (and stellar) light, and will thus absorb the vitality of the heavenly body. This rite is especially significant to the God Djehuty, Whose primary manifestation is that of the moon, also known as the “silver Aten”. It was during this rite that the Aegis of Djehuty was handed over to the possession of the God as a vehicle of the Netjer’s protection and healing. This image of Djehuty is a manifestation of the God not solely as scribe of the Gods, creator of language, and divine patron of all knowledge, but more unusually as the wrathful defender of cosmic justice (Ma’at) and healer of wrongs, the Divine Judge Who arbitrates between what is just and what is unjust. Here is Djehuty as the ultimate source of law and order, the One Who metes out punishment and reward, and the One Whose hands heal what has been wrongfully torn asunder.

“Manifests the justice of Djehuty
in His Shield-image of sacred power!
He Who brings the Wedjat Eye
the Thrice-Great Lord of Eight-Town!

You have Your justice O Djehuty!
You accomplish what the Nine Gods desire.
You bring back the distant Eye,
Giving sight to the bleary-eyed One,
Making whole the shining power of Ra!
You are the Silver Aten, the Moon of dazzling radiance,
the Maker of the Balance
Who exterminates the enemies of the great Wedjat Eye!

Manifests the justice of Djehuty
in His Shield-image of sacred power!
He Who brings the Wedjat Eye
the Thrice-Great Lord of Eight-Town!

You are great in power and great in strength,
the Lord Who establishes Ma’at and is great in fear
in every land.
You are the Messenger astute in speech
before all the Gods,
the Clean One Whose purity increases truth
and knows the mysteries of every heart.
You are the seer of all hearts,
the Master of every mystery,
the One foremost in the balance
Whose knowledge foretells the message
of the Scales of Truth!

Manifests the justice of Djehuty
in His Shield-image of sacred power!
He Who brings the Wedjat Eye
the Thrice-Great Lord of Eight-Town!

Manifests the justice of Djehuty
in His Shield-image of sacred power!
He Who brings the Wedjat Eye
the Thrice-Great Lord of Eight-Town!”

Excellent! Congratulations on your sale!

💖💖💖Art provides an opportunity for kaleidoscopic thinking. Each time we shift the lens of our perceptions, we gain new perspectives — and new opportunities for innovation.💖💖💖 CONGRATULATIONS ON YOUR RECENT SALE OF A WONDERFUL WORK!

Congratulations on the sale of the amazing piece of art. The details are spectacular.