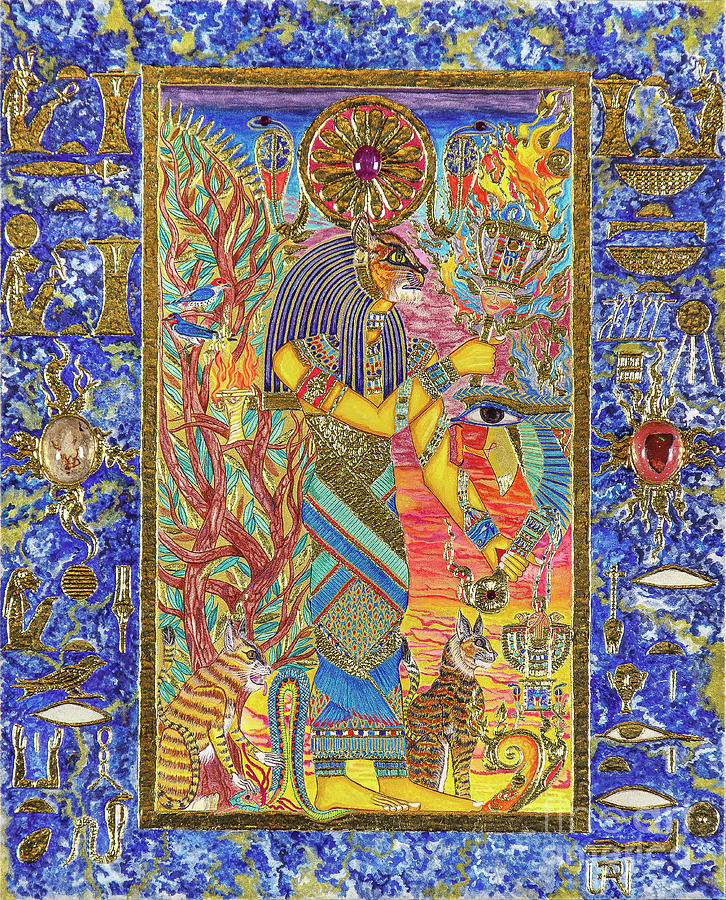 In “Bast the Light-Bringer” we see the Goddess standing in front of the Ished Tree at dawn. This was the time of day when, according to the solar mythos, the Sun-God Ra was reborn after His great nocturnal struggle against the serpent-demon Apep. It was at dawn when the blood of Apep was spilled across the eastern sky, which reads as the bright pink stain spreading through the heavens just at sunrise.

We see the primary scenario in this mythos taking place at the base of the Ished Tree, where the Book of Coming Forth By Day, Pert-em-hru, the so-called “Book of the Dead”, tells us that the Great Tomcat dispatches the demonic serpent with his knife. We know that the Goddess Bast was also associated with the Great Tomcat, and that is the association being made in this icon. Instead of decapitating Apep with a knife, Bast as the Tomcat has been given long silver nails, which pin down and slice through the scales of the serpent.

The Ished Tree is the sacred tree of Ra at Annu or Heliopolis, upon whose leaves were written the names and regnal years of all the kings of Egypt. In this instance, the presence of the Ished Tree embodies the proper order of life in the cosmos, the divine order or Ma'at established by Ra. In a manner of speaking it also represents the Sun-God Ra Himself, indicated by the raised reliefs of some of the leaves, which have been gilded with 22 karat gold. Gold represents the skin of the Sun-God, His indestructible nature.

The birds in this icon are used not only as symbols of life, the power of life to overcome death, but also serve as symbols of the Sun-God, Whom Lady Bast is representing. These are the menets, swallows or martins, which stand in the prow of the night barque of the Sun-God, and hail His triumphant progress against chaotic night. One swallow faces right, and one faces left; these being the directions of west and east respectively.

The root of Bast's name is 'bas', an ointment jar, so it would appear that the name Bast or Bastet means something like 'She of the ointment jar'; which is just one interpretation. A 'bas' jar has been placed in the Ished Tree as a representation of Bast's name, but also as an embodiment of Her power, Her fiery nature, which has always been very solar, associated with Ra the Sun-God.

Bast is called the 'Eye of Ra', and in this She takes upon Herself the role of the destructive or defensive power of Ra, which shoots out as fire to incinerate the enemies of the Sun-God. The 'bas' jar here has been very faithfully modeled upon the hieroglyph for ointment jar, which itself was modeled after a specific type of alabaster jar with its tightly sealed lid.

Bastet was originally a lioness goddess, in the pyramid age when She manifested as something quite ferocious and warlike. That defensive, protective character of Hers is referenced more subtly in this icon; it does not predominate, because the purpose of this icon is to summon the much more benign aspects of the Goddess, Her qualities as a compassionate source of motherly protection. Those wrathful characteristics She has as a lioness, as the Eye of Ra, have been toned down in this depiction of the Goddess. Behind Bast we see a smaller scene of the Great Tomcat slaying Apep, to honor the very ancient warlike character of Bast.

Later on, Bast's association with the domestic cat came to dominate Her iconography, and because that is the aspect of Her that contemporary devotees gravitate towards, She has been depicted here in Her cat form.

The intimate relationship of Bast with Ra is spelled out in the presence of the large Wedjat Eye, its falcon talon reaching out to exchange a blessing of power with the Goddess. The Wedjat Eye is always used as a symbol of solar power, and in this instance it is used to denote the creative power of Ra as the originator of the cosmos.

The Goddess carries upon Her head the disk or face of the Sun, which the Egyptians used as a determinative for the name of Ra. In fact, the name of Ra can be written with just the solar disk, having a dot in the center. To accomplish this, a sumptuous Indian star ruby has been placed in the center.

Foremost of Bast's symbols, and the primary symbol used in all ancient images of the Goddess, is the Sistrum, which the Egyptians called sesheshet, a ceremonial rattle beloved of the Gods. This is a highly charged ritual object used first and foremost by chantresses or priestess singers in the temples. Bast seems to have been associated with music and the joy it brings from almost the beginning of Her iconography, and is practically inseparable from it; so, in this icon of Her we see the Sistrum as an embodiment of Her power and the light She brings. Notice how the multicolored flames shoot out from the base of the rattle and writhe upward. These can be thought of as music, as the sacred power being produced as the Goddess flicks Her wrist back and forth to create the rattling sound.

Two of the other important symbols of Bast are the menat necklace and the aegis or sacred shield. The menat is a heavily beaded ritual object closely associated with the adoration of goddesses such as Hathor and Bast, and was used as a form of rattle, having a counterweight at one end that was held by priestesses. Bast holds a menat decorated with golden lotus leaves and a sixteen-petaled rosette, in the center of which has been placed a ruby-coloured Austrian crystal. Two strings of beads connect the menat to the aegis-shield, which has at its center a tiny image of Bast as a lioness, paying tribute to Her roots.

The hieroglyphs framing the Goddess read: Bastet the Great, Bastet Who is the Great Enchantress. Bastet the Lady of Heaven, Who is Mistress of Illumination, the beautiful of face as the Eye of Ra.