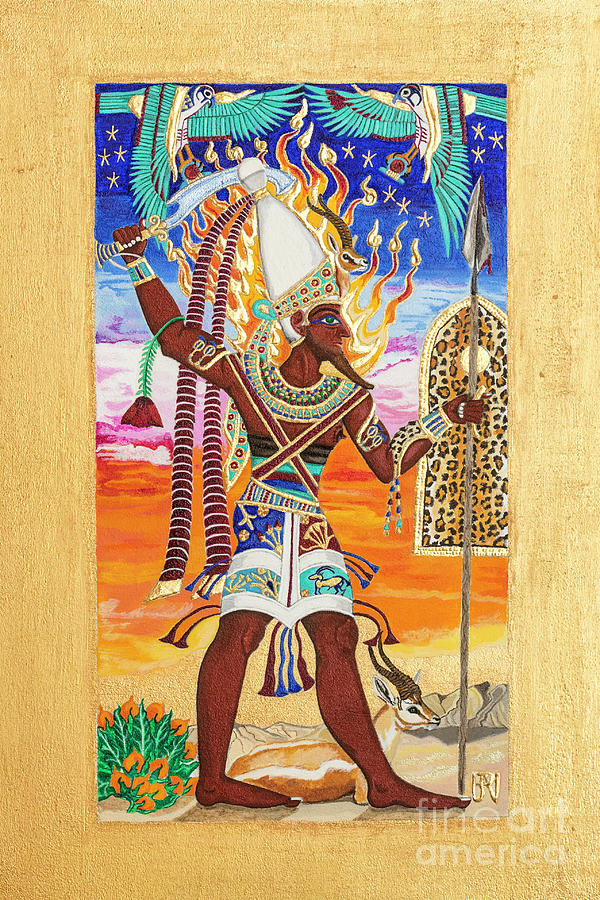 Reshpu (Rashap or Reshef) was imported from Syria into Egypt, and despite His foreign origins was adopted snugly into the Egyptian pantheon, finding veneration in established temple cults in the most ancient capital of Mennufer (Memphis). In Egypt Reshpu formed part of a triad of gods composed of Himself, the God Menu (Min) and the Syrian Goddess Qadesh.

He was always a martial, desert-dwelling deity, and it is apparent through His early association with the God Sutekh (or Set) that He was regarded by the ancient Egyptians as a fierce deity Whose power could be demonstrated in the harsh storms and conditions moving across the desert. In these regards Reshpu could be a bringer of pestilence, in a manner not dissimilar from the ferocious lioness-headed Goddess Sekhmet, Whose violence could be expressed in illness or plague.

Similar to deities like Ba'al or Sutekh, Reshpu is a god of thunder and storms, together with war. His stance, holding aloft a club or khepesh (scimitar) in one hand and a spear or war shield in the other, embodies His mastery over martial valor and power over life and death. Our icon of “Reshpu Lord of Might” depicts the God as divine warrior, complete with upraised, scimitar wielding arm, and war shield and spear.

However, these military attributes serve an even deeper purpose than that of war in the human realm; for Reshpu was held by the ancient Egyptians to be a healer of abdominal dysfunctions, over which He had influence due to His ability to control the demon responsible for such conditions. It is this link with healing and protection that is being stressed in this icon, which venerates Reshpu in His role of defender and healer.

Reshpu's protective power, together with His ability to cure abdominal pain, is demonstrated in His association in this icon with the red or common poppy (Papaver somniferum L.) and mandrake (Mandragora officinarum L.), both plants of which were used in ancient times as healing narcotics and analgesics. The appearance of these here is to bolster Lord Reshpu's function as a god of healing protection, which is also a magical force symbolized by the spray of flames leaping up from behind the God's head and shoulders.

Reshpu has always been associated with the gazelle (Gazella dorcas), an animal whose horns or full head appear on the brow of the God's tall white crown, from which two long streamers are always seen fluttering. Gazelles (and associated species) could represent a source of unruly forces or chaos to the ancient Egyptians, but they could also embody fertility. It is probable that, as a desert dwelling animal, fast of foot and with defensive horns, the gazelle became the chosen emblem of Reshpu because of its habitat and nature. It's head or horns as seen on the crown of the God must have been, from the beginning, a symbol of valor, strength, and magical power; and that is most certainly their intention here. We see, too, a recumbent gazelle between the striding feet of the God, here representing the desert origins of Reshpu, and His power over the natural forces of life and chaos.

As a god associated with war and kingly valor, Reshpu is flanked by two falcons of the God Heru (or Horus), another deity with whom Reshpu could be associated in ancient times as a god of royal power. From their talons they offer the shen ring, insignia of eternal power.