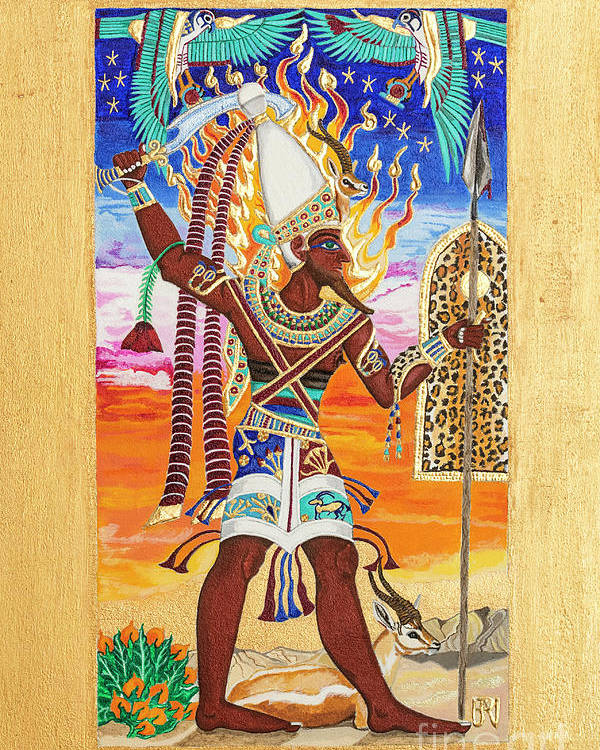 Rolled in a Tube

Reshpu Lord of Might poster by Ptahmassu Nofra-Uaa.   Our posters are produced on acid-free papers using archival inks to guarantee that they last a lifetime without fading or loss of color. All posters include a 1" white border around the image to allow for future framing and matting, if desired.

Reshpu (Rashap or Reshef) was imported from Syria into Egypt, and despite His foreign origins was adopted snugly into the Egyptian pantheon, finding... more

Reshpu (Rashap or Reshef) was imported from Syria into Egypt, and despite His foreign origins was adopted snugly into the Egyptian pantheon, finding veneration in established temple cults in the most ancient capital of Mennufer (Memphis). In Egypt Reshpu formed part of a triad of gods composed of Himself, the God Menu (Min) and the Syrian Goddess Qadesh. He was always a martial, desert-dwelling deity, and it is apparent through His early association with the God Sutekh (or Set) that He was regarded by the ancient Egyptians as a fierce deity Whose power could be demonstrated in the harsh storms and conditions moving across the desert. In these regards Reshpu could be a bringer of pestilence, in a manner not dissimilar from the ferocious lioness-headed Goddess Sekhmet, Whose violence could be expressed in illness or plague. Similar to deities like Ba'al or Sutekh, Reshpu is a god of thunder and storms, together with war. His stance, holding aloft a club or khepesh (scimitar) in one han...