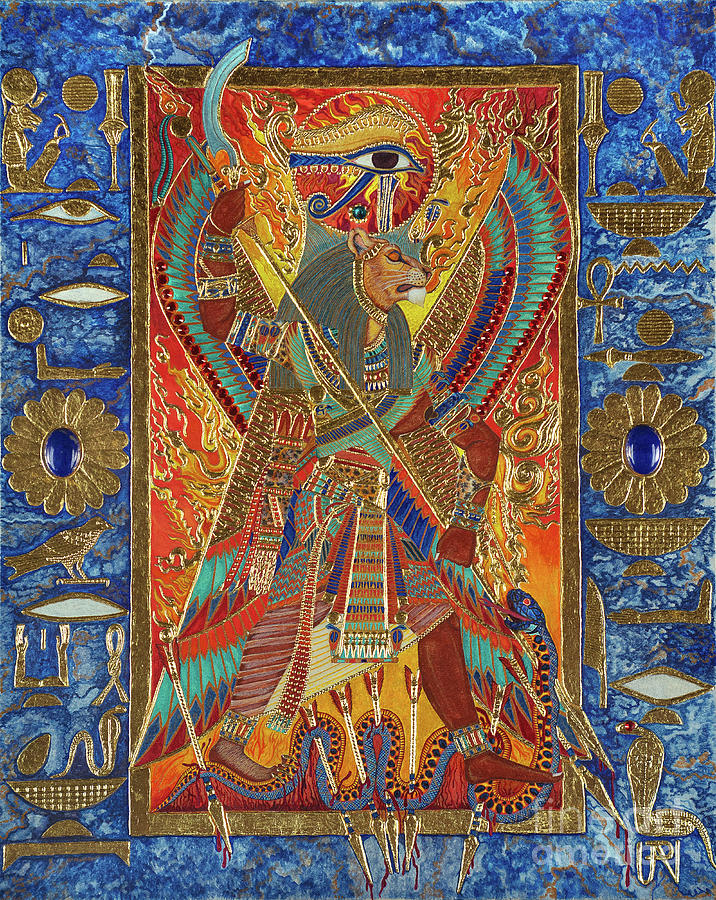 Sekhmet the Eye of Ra

Sekhmet the Eye of Ra

“Sekhmet the Eye of Ra” presents us with one of the key episodes in the solar mythos. The lioness-headed Sekhmet is known from a sacred drama as a enraged, fire breathing and bloodthirsty lioness, whose terror is unleashed on the enemies of the Sun-God. This is the episode being illustrated here; however, we also have a reference being made to the theology of Annu or Heliopolis which states that at dawn, Ra as the Great Tomcat slays the serpent-demon Apep with His knife beneath the sacred persea tree, the Ished. The Goddess here is the very embodiment of the destructive power of the Sun-God Ra, whose flaming Wedjat Eye She carries in the sun disk upon Her head.

Sekhmet is here an embodiment of the eastern direction by virtue of Her being depicted facing the western or right side of the panel. She also carries the sun on Her head, which insinuates the rising sun. It is is the rising sun, the eastern sun, because the time of day when Ra slays Apep beneath the Ished Tree is precisely at sunrise. Here we have Sekhmet, the newly birthed eastern sun, sending Apep into the darkness of the west.

One of the underlying themes of this icon is the destructive power of the Goddess. Sekhmet as the representative of divine justice has the power to control and destroy the ability of chaos as it attempts to undo the work of creation. She is the fire of the Sun-God's Wedjat Eye, His representative, His swift justice.

As a goddess of war, a defensive and protective goddess, Sekhmet carries the kingly khapesh or scimitar and a fiery lance. A quiver of arrows is strapped to Her corset, from which She has already drawn and let loose Her feared seven arrows.

Excellent! Congratulations on your sale!

💖💖💖“An art is a poem without words”💖💖💖 Congratulations on your recent sale of this amazing Work!💖💖💖

Awesome work of art. So much intricate detail. Truly a special piece.

💖💖💖Art provides an opportunity for kaleidoscopic thinking. Each time we shift the lens of our perceptions, we gain new perspectives — and new opportunities for innovation.💖💖💖 CONGRATULATIONS ON YOUR RECENT SALE OF A WONDERFUL WORK!

Nice job! Keep up the good work! Great talent. I really would apreciate your feedback of my Photography ;-)

Congratulations on your well deserved sale of this great artwork! F/L

😊 💖 🌸Congratulations on your recent sale of a wonderful work. 😊 💖 🌸

Congratulations!!!!! So intricate, so incredible, awesome.

You have some beautiful artwork, keep well and creating

Nice & Congrats on your sale :)

Congratulations on your sale!

Congratulation on your sale!

🏆 Congrats on your Sale!

Congrats for the sale!