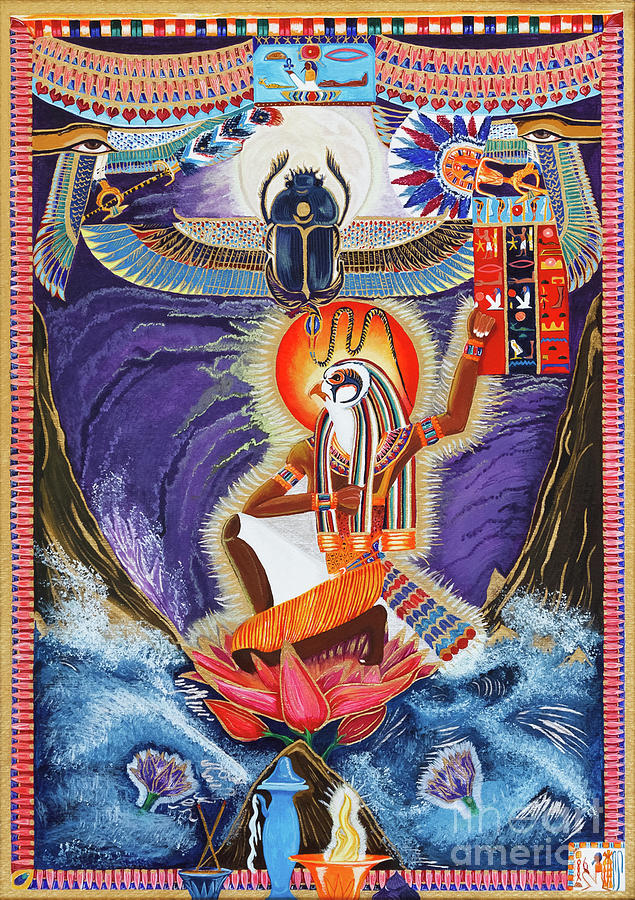 This icon (the very first icon created by the artist) captures one of the most significant episodes in ancient Egyptian theological thought, the moment of creation from the Primordial Abyss. The Egyptians envisaged creation as a dynamic process launched by the creator-god from the darkness of the cosmic ocean nun, the boundless, formless waters embodying the potentiality for all created things.


Within the nun, the netjer or god awoke as a golden child enfolded by the petals of the sacred blue lotus (nymphea caerulea). This divine child was the pre-pubescent manifestation of the sun-god Ra (or Re), whom the Egyptians recognized as the first and most powerful god in a pantheon comprised of a multitude of gods.


The netjer Ra was known by a panoply of names, epithets and iconographic forms, but foremost of these was his anthropomorphic form of falcon-headed deity. From the beginning of Egyptian civilization the falcon- called bik or bak in the Egyptian language- was the icon encapsulating every sacred and powerful quality the Egyptian mind could conceive.


Although hallowed by other deities, it was Ra who claimed the falcon (Falco peregrinus) as his own primary incarnation, the embodiment of the creative powers through which the earth and sky and all living things came into being. Because of its dominance in the sky, the falcon was seen as a solar creature, and was therefore synonymous with Ra as the god whose procreative powers emerged with the sun and were manifest through it.


I have portrayed Ra not as the child sun-god, but as a fully mature deity bearing his hallmark falcon head, behind which radiates the sun, coming into being through the creative process of Ra's own coming into being. Atop his headdress (with its three multi-colored lappets) writhes the hooding cobra-goddess iaret (or Greek uraeus), known as the fiery “Eye of Ra”, who embodies the creative-destructive powers of Ra as creator of gods and humankind.


Ra himself kneels in the center of the lotus of creation (which I have depicted in warmer solar tones rather than the traditional blue) in a posture known as the henu gesture, meaning “to glorify”, “praise” or “exalt”. This ritualistic pose is seen in the deities who salute the rising sun each morning, thus is appropriate in this icon celebrating the creator-god as master of the first sunrise.


The sacred lotus of Ra's coming is seen blossoming from the pyramidal mound of earth called the benben, the hallowed mount of creation after which the monumental pyramids were modeled.


Above the head of Ra soars another of the sun-god's primary symbols, the sacred scarab beetle (Scarabaeus sacer), which embodies the god Khepri, “the becoming one”, a form of the sun-god carrying the powers of rebirth, resurrection and creation. Flanked by the two celestial Wedjat Eyes, signifying the sun and moon simultaneously, the winged scarab raises the full moon in a night sky just receiving the illuminated presence of the sun-god on creation day.


A banner suspended behind the upraised arm of the creator-god repeats the first line of a prayer from the Egyptian Pert-em-hru (or Book of the Dead), saying: Duwa Ra duwa Ra kheft weben-ef em akhet abtet ent pet, “Worship Ra! Worship Ra when he rises in the eastern horizon of the sky!”