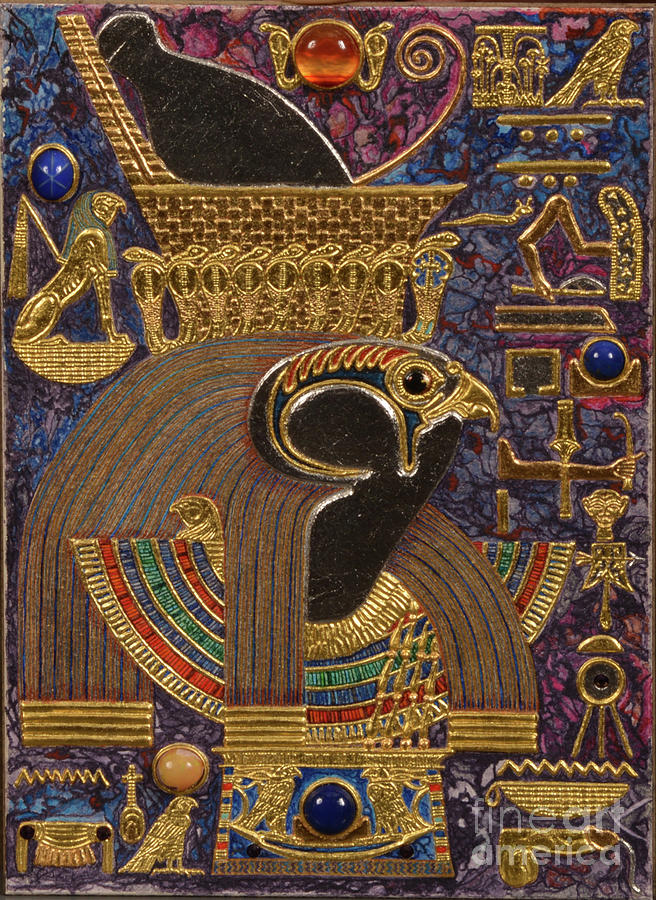 Akem Shield of Heru Who Unites the Two Lands

Akem Shield of Heru Who Unites the Two Lands

The Aegis of Heru Who Unites the Two Lands (Heru-sema-tawy, Greek Harsomptus) is the third panel of the Lords of Valor Triptych, completing this “family” of gods Who are united through the magic of reconciliation and reunification. These are three Netjeru Who each function as powerful gods in Their own right, governing the terrestrial and stellar, solar and lunar domains; however, in the nearly earth-shattering Contendings of Heru and Set, the 80 year family war for the kingship of the Two Lands, we are told of the “birth” of the lunar orb (Iah, the orb of Djehuty’s headdress) from the forehead of Set (Sutekh) via the semen of Heru the God Set had ingested. This strange event links all three gods in an unlikely relationship; one in which the wise Djehuty is arbiter and pacifier of the two Combatants bent on gaining physical and moral ascendancy over the other. It is the God Djehuty Who steps between the two antagonistic deities to separate truth from falsehood- in the hopes of achieving an accord within an increasingly hostile situation that threatens to rend the harmony of creation.


The weaving of harmony from disparate elements is part of the Heka (or Magic) of this triptych, which gives us the healing radiation of the Moon (the Aegis of Djehuty), the searing fire of the desert (the Aegis of Sutekh), and finally the calm majesty of the infinite sky (the Aegis of Heru). The Aegis of Djehuty and the Souls of Khmennu is the residence of that Lord of the Divine Words (neb medu-netjer), Whose wisdom is so great as to encompass knowledge of every thing that has been created, and all that has yet to be created. Djehuty appears as the One “Who brings the Wedjat Eye” (Ani-Wedjat), as that Great Magician with the power to heal the Eye of Heru after it has been torn from Heru by Set. It is Djehuty Who comes forth to provide the healing that is vital to the continuance of the proper order and maintenance of creation (Ma’at). But in a certain sense, the healing orb of Djehuty, that is to say, the lunar disk, is the byproduct of a divine synthesis between the explosive energies of the Gods Set and Heru. This is a synthesis that is magically captured in the iconography and functions of the Aegis panels of Sutekh and Heru, which bring together these volatile gods not as combatants or adversaries, but as compliments within the dichotomy of creation. Here the Gods work together as the co-creators of wholeness (wedjauw), epitomized in the central panel of the triptych by the status of Djehuty as the One Who Brings Forth the Wedjat Eye. The other two panels in the triptych are each intended to stand in for part of the Wedjat Eye, which is eternally in the process of being reconciled or healed after injury.

The Aegis of Heru-sema-tawy, like the other two icons in the triptych, is an embodiment of healing and protection, and a magical weapon against the forces of chaos bent on dismantling the creation of the Gods. The aegis- or, to be more precisely Kemetic, the akem or “shield”- takes the form of the head, crown/ headdress and shoulders of the deity, which are covered by the broad collar known as the wesekh, and further ornamented in many instances by an elaborate pectoral suspended from multiple strands of drop-shaped beads. The aegis can be found in the form of amulets or the caps of military or temple standards carried in parades, but are most prominently seen as sacred ornaments on the prow and stern of the portable barque-shrines in which the cult images of the Gods are carried in religious processions. The aegis is, therefore, a device encompassing the dynamic power of a deity in action, and carries with it the apotropaic force of the god or goddess it represents. There is a defensive nature to the aegis, which at all times behaves as a repellent to the enemies of the Gods. This means that the presence of the aegis may be adopted by devotees of the Gods as a means of being surrounded (quite literally shielded) by the boons of the deity that repulse all beings or forces contrary to that deity’s presence. In terms of the healing graces emanated by a deity, the aegis is the most intimate manifestation of that power which preserves life and averts disaster.

Each Aegis panel represents and contains the vital power of a specific deity, and encompasses specific aspects of a deity’s personality. The Gods are unique and individual holy powers, and Their various names, epithets and modes of iconographic representation are each linked to unique qualities of that deity’s manifestation through the substance of creation. The Aegis of Heru Who Unites the Two Lands, though consecrated as the body of Heru-sema-tawy, is more unique still because it is being utilized by multiple deities simultaneously, instead of by a single deity. The God Heru is generally acknowledged to share the same essence as a legion of deities known loosely as the “Heru Gods”, Who can appear in the myth cycles as “elder” or “younger”, as the father or forerunner of one deity here, and son of another pair of gods there. The Heru Gods and Their iconography appear to be greatly interchangeable, though this in no way means that They are not also distinctly Their own sacred personalities. Each temple or locale in ancient times appears to have had its own manifestation of this Netjer, which was doubtlessly understood to be both its own individual deity and linked with the powers of the other Heru Gods all at the same time.


The Aegis of Heru is the dwelling ground of multiple Heru Gods, including Heru-sa-Auset (Gr. Harsiese, “Heru/ Horus the Son of Auset or Isis”), Heru-Behdety (“Heru the Behdetite”, that is, Heru of the town of Edfu), Heru-Wer (“Heru the Elder”), Heru-em-akhet (“Heru of the Horizon”),Heru-akhty (“Heru of the Two Horizons”) and Heru-pa-khrad (or Gr. Harpocrates, “Heru the Child”). The use of a cult image for multiple deities is not my usual modus operandi as an iconographer, however, flexibility is one of the requirements of my vocation as co-creator with deities Whose manifestations are vast, and Who, on occasion, may direct me to operate outside the strict rules of canon in order to accommodate Their desires for contact. The Heru Gods certainly fall into this category, for it seems to me that They are quite comfortable with the wearing of one another’s clothing, and that They all share an essential underlying nature we might call “Heru-ness”.

“Manifests the valor of Heru-sema-tawy

in His Shield-image of sacred power!
He Who Fights in the Horizon
the Beautiful Falcon of Gold!

You have Your valor O Heru-Who Unites-the Two Lands!
You are He Who Fights in the Horizon,
the Powerful of Face Whom the light-rays beget
as the Beautiful Falcon of Gold.
O Lord of the Sky Whose Wedjat Eye shines undiminished!
Your Throne is established forever in the seat of Your Eye;
this dazzling green Wedjat Eye of supreme fear
throughout the lands, offered by those You heal,
proffered by those who praise You as preeminent and above.

Manifests the valor of Heru-sema-tawy
in His Shield-image of sacred power!
He Who Fights in the Horizon
the Beautiful Falcon of Gold!

O Heru the Behdetite, Beloved of Hwt-Her, Beloved of Aset!
You are the Great God, Lord of the Sky, the Beautiful Falcon
and Potent Heir as the Son of Aset, the cherished of Hwt-Her
Who came forth from the Great One, the Eldest Son of Wennefer!
Terrible in Your greatness, dazzling in Your plumage of precious metal,
dominant in the sky with sharp talons, sharp beak, and sharp-sighted
Wedjat Eye; You are the Heir of Sunbeams begotten of the
light of Ra.

O Lord of the Sky and Keeper of Heaven, radiant of face and
powerful of countenance with Your Eye of lapis-lazuli
and feathers of electrum!
Receive the sight of Your Wedjat Eye in the moment of
its returning; may its renewal be the renewal of those who
praise You as the Great God among the Gods!

Manifests the valor of Heru-sema-tawy
in His Shield-image of sacred power!
He Who Fights in the Horizon
the Beautiful Falcon of Gold!

Congrats on your sale!

Congratulations on your well deserved sale!

💖💖💖“An art is a poem without words”💖💖💖 Congratulations on your recent sale of this amazing Work!💖💖💖

Congratulations on your sale

Congrats on your sale!!