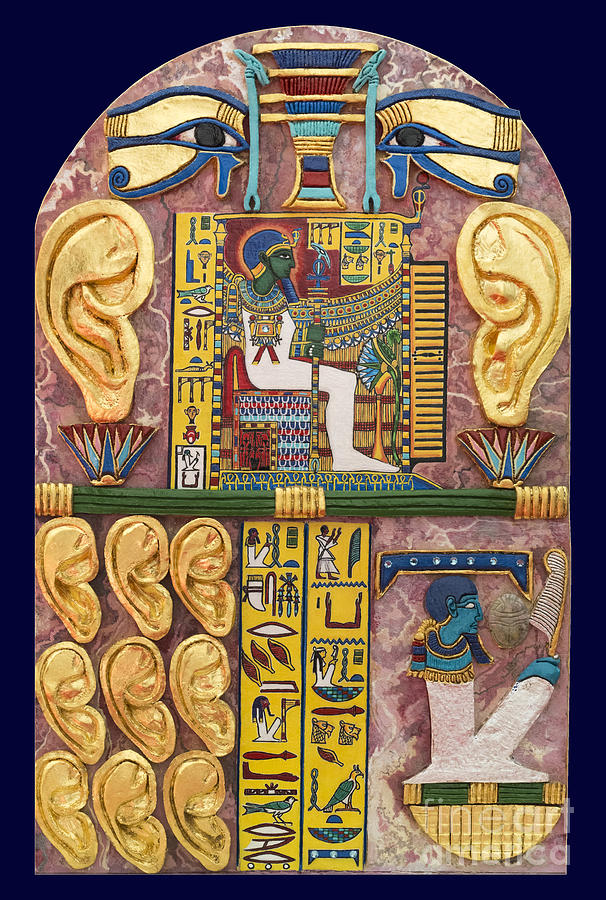 Stela of Ptah Who Hears Prayers

Stela of Ptah Who Hears Prayers

This hand carved stela or devotional stone crafted by the artist to honor the God Ptah. In the Egyptian sacred tradition the God Ptah created the earth and all living things through the power of His speech. Honored by the Egyptians as the patron of the arts, stone masons, goldsmiths, sculptors and painters, Ptah is one of the oldest gods worshiped by the Egyptians, whose cult center at Mennufer (Greek Memphis) was the first capital of the Egyptian state. Ptah has always been recognized as a fatherly and compassionate creator who listens to all prayers directed at Him.


The upper register of the stela features an image of the God Ptah seated within His shrine before an offering of lotus flowers. The door to His shrine is opened, appropriate here as a symbol of Ptah's reception of His devotee's prayers. Two giant ears fulfill the magical function of this stela as an awakened object through which the God receives and answers prayers.


Crowning the stela are the two Wedjat Eyes which here act as the eyes of the Deity, between which rise the Djed Pillar and Was Scepters, both symbols frequently associated with Ptah as the Creator of humankind and giver of creative strength. The text before Ptah says: "Ptah the beautiful of face who is the Lord of Truth, Master of Strength and Lord of the Gods!" Behind Ptah is a text that reads: "Ptah upon the Great Throne, the Great God Who is the Father of the Gods within the Soul-Mansion of Ptah".
The prayer in the lower register translates: "Praise be to the Soul of Ptah, the Lord of Truth who is great of strength, the hearer of prayers and Lord of heaven! Ptah the ears which hear, the Great God who is greatly loving!"